The success and innovation of the Dynetics team – which utilised Vision4ce’s CHARM100 video tracker – in the US-funded Gremlins program has been recognised by the National Aeronautic Association 2021 Robert J. Collier Trophy selection committee as a 2021 trophy finalist.

The Gremlins program, managed by the US Defense Advanced Research Projects Agency’s (DARPA) Tactical Technology Office, aimed to demonstrate aerial launch and recovery of multiple low-cost, reusable unmanned aerial systems (UAS). The technology, when proven, would in turn enable management of sensors in denied environments and also help reduce the risk to humans from potential threats.

Vision4ce’s CHARM100 video tracker technology was mounted in the Dynetics X-61A GAV to provide novel target detection and tracking techniques to assist the drone’s positionings during the final phases of the recovery operation. The CHARM100 capability was selected by Sierra Nevada Corporation, which is part of the Dynetics team, for its ability to offer high resolution, low latency image processing, video encoding and streaming to the GAV.

John Thornton, Director of Image Processing at Vision4ce said, “We’re extremely proud of the role that our technology has played in the Gremlins program, and how the success and innovation of the Dynetics team has been recognised by the prestigious Robert J. Collier Trophy selection committee.

“Being selected as a finalist for the Trophy clearly demonstrates the forward-thinking capability developed during the program, and the potential it offers to the aerospace domain. Our CHARM100 video tracker has a range of applications across all defence domains, and we look forward to developing its use and integration with UAS.”

The National Aeronautic Association (NAA) celebrates significant achievements in aerospace annually through the Robert J. Collier Trophy. The award acknowledges “the greatest achievement in aeronautics or astronautics in America, with respect to improving the performance, efficiency, and safety of air or space vehicles, the value of which has been thoroughly demonstrated by actual use during the preceding year.” 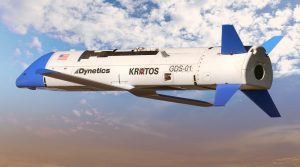